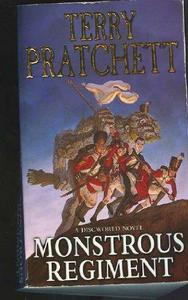 Monstrous Regiment is a fantasy novel by British writer Terry Pratchett, the 31st novel in his Discworld series. It takes its name from a 16th-century tract by John Knox opposing female rule, titled The First Blast of the Trumpet Against the Monstrous Regiment of Women. The cover illustration of the British edition, by Paul Kidby, is a parody of Joe Rosenthal's photograph Raising the Flag on Iwo Jima. Monstrous Regiment was nominated for a Locus Award in 2004.
Read more or edit on Wikipedia