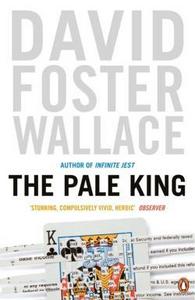 The Pale King is an unfinished novel by David Foster Wallace, published posthumously on April 15, 2011. It was planned as Wallace's third novel, and the first since Infinite Jest in 1996, but it was not completed at the time of his death. Before his suicide in 2008, Wallace organized the manuscript and associated computer files in a place where they would be found by his widow, Karen Green, and his agent, Bonnie Nadell. That material was compiled by his friend and editor Michael Pietsch into the form that was eventually published. Wallace had been working on the novel for over a decade. Even incomplete, The Pale King is a long work, with 50 chapters of varying length totaling over 500 pages. The novel was one of the three finalists for the 2012 Pulitzer Prize for Fiction, but no award was given that year.
Read more or edit on Wikipedia