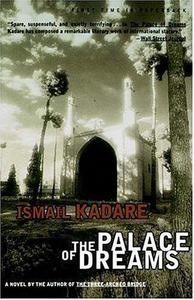 The Palace of Dreams

The Palace of Dreams (Albanian: Pallati i ëndrrave) is a 1981 novel by the Albanian writer Ismail Kadare. Set ostensibly in the Ottoman Empire, but in a deliberately imprecise past shaded by myth and intended to represent the modern totalitarian state, The Palace of Dreams follows the rapid rise of Mark-Alem, a young Ottoman Albanian related to the powerful Köprülü family, within the bureaucratic regime of the title palace, a shady ministry whose objective is to gather, examine and interpret the dreams of the empire's subjects in order to uncover the master-dreams, which are believed to shell the future destiny of the Sultan and the state. Conceived in the years 1972-1973 and written between 1976 and 1981, The Palace of Dreams is widely regarded as one of Kadare's masterpieces. After an emergency meeting of the Albanian Writers Union and a public denunciation by Ramiz Alia, Enver Hoxha's designated successor, the novel was banned two weeks after its publication, even though, "in an absurdist twist", by that time, the book had already sold out.
Read more or edit on Wikipedia