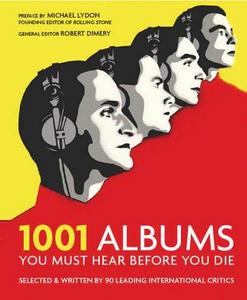 1001 Albums You Must Hear Before You Die

1001 Albums You Must Hear Before You Die is a musical reference book first published in 2005 by Universe Publishing. Part of the 1001 Before You Die series, it compiles writings and information on albums chosen by a panel of music critics to be the most important, influential, and best in popular music between the 1950s and the 2010s. The book is edited by Robert Dimery, an English writer and editor who had previously worked for magazines such as Time Out and Vogue.Each entry in the book's list of albums is accompanied by a short essay written by a music critic, along with pictures, quotes, and additional information (such as the album's running time and producer). Only albums consisting of original material by a particular artist are included. Compilations of various artists, and most film soundtracks, are excluded.The most recent edition consists of a list of albums released between 1955 and 2017, part of a series from Quintessence Editions Ltd. The book is arranged roughly chronologically, starting with Frank Sinatra's In the Wee Small Hours and the most recent edition concluding with Microshift by Hookworms.
Read more or edit on Wikipedia