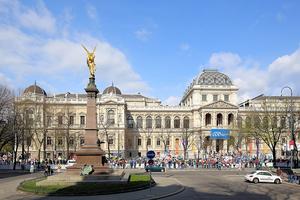 The University of Vienna (German: Universität Wien) is a public university located in Vienna, Austria. It was founded by Duke Rudolph IV in 1365 and is the oldest university in the German-speaking world. With its long and rich history, the University of Vienna has developed into one of the largest universities in Europe, and also one of the most renowned, especially in the Humanities. It is associated with 21 Nobel prize winners and has been the academic home to many scholars of historical as well as of academic importance.
Read more or edit on Wikipedia