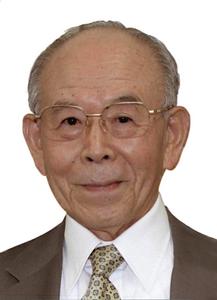 Isamu Akasaki (赤崎 勇, Akasaki Isamu, January 30, 1929 – April 1, 2021) was a Japanese engineer and physicist, specializing in the field of semiconductor technology and Nobel Prize laureate, best known for inventing the bright gallium nitride (GaN) p-n junction blue LED in 1989 and subsequently the high-brightness GaN blue LED as well.For this and other achievements, Akasaki was awarded the Kyoto Prize in Advanced Technology in 2009, and the IEEE Edison Medal in 2011. He was also awarded the 2014 Nobel prize in Physics, together with Hiroshi Amano and Shuji Nakamura, "for the invention of efficient blue light-emitting diodes, which has enabled bright and energy-saving white light sources". In 2021, Akasaki, along with Shuji Nakamura, Nick Holonyak, M. George Craford and Russell D. Dupuis were awarded the Queen Elizabeth Prize for Engineering "for the creation and development of LED lighting, which forms the basis of all solid state lighting technology".
Read more or edit on Wikipedia