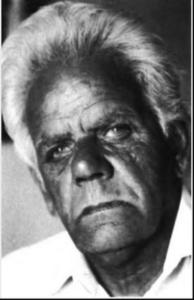 Jack Leonard Davis (11 March 1917 – 17 March 2000) was an Australian 20th-century Aboriginal playwright, poet and Indigenous activist. Academic Adam Shoemaker, who has covered much of Jack Davis‘ work and Aboriginal literature, has claimed he was one of “Australia’s most influential Aboriginal authors”. He was born in Perth, Western Australia, where he spent most of his life and later died. He identified with the Western Australian Nyoongah tribe, also spelt Noongar, and he included some of this language into his plays. In conjunction with Davis’ use of his native language, academics have inferred that his work includes themes of Aboriginality and Aboriginalism. These literary concepts are used to communicate the relationship between cultures.While known for his literary work, Jack Davis did not focus on writing until his fifties. His writing centred around the Aboriginal experience in relation to the settlement of white Australians. His collection of poems The First Born was his first work to be published and also made him the second Aboriginal to have published poetry by 1970, after Kath Walker, also known by her Aboriginal name Oodgeroo Noonuccal. He later focused his writing on plays, starting with Kullark, which was first performed in 1979. His plays were recognised internationally and were performed in Canada and England. His work and contribution was later recognised by the Order of the British Empire (BEM) in 1976, the Order of Australia Award in 1985 and two honorary doctorates from the University of Western Australia and Murdoch University. His work today is now included in many Australian school syllabuses for children to read and discuss.
Read more or edit on Wikipedia