Jane Hissey (born 1952) is a British author and illustrator of children's books. She is best known for her series of children's books Old Bear and Friends, which became the basis for a BAFTA award-winning television series Old Bear Stories, episodes of which were released on VHS by Carlton Video.
Read more or edit on Wikipedia 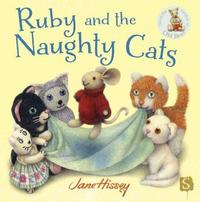 Ruby and the Naughty Cats