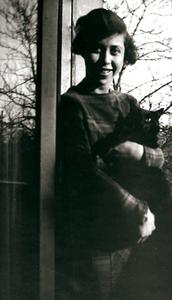 French novelist who died at the age of 39 in Auschwitz

Irène Némirovsky (French: [iʁɛn nemiʁɔfski]; 11 February 1903 – 17 August 1942) was a novelist of Ukrainian Jewish origin who was born in Kiev, Ukraine under the Russian Empire. She lived more than half her life in France, and wrote in French, but was denied French citizenship. Arrested as a Jew under the racial laws – which did not take into account her conversion to Roman Catholicism – she died at Auschwitz at the age of 39. Némirovsky is best known for the posthumously published Suite française.
Read more or edit on Wikipedia