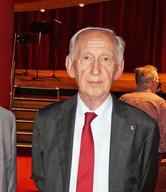 Jean Tulard (born 22 December 1933, Paris) is a French academic and historian, specialising in the history of cinema, of the French Consulate and the First French Empire. He is a member of the Académie des sciences morales et politiques since 1994. Source: Wikipedia (en)