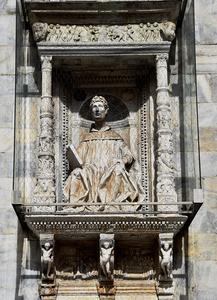 Gaius Plinius Caecilius Secundus, born Gaius Caecilius or Gaius Caecilius Cilo (61 – c. 113), better known as Pliny the Younger , was a lawyer, author, and magistrate of Ancient Rome. Pliny's uncle, Pliny the Elder, helped raise and educate him. Pliny the Younger wrote hundreds of letters, of which 247 survive, and which are of great historical value. Some are addressed to reigning emperors or to notables such as the historian Tacitus. Pliny served as an imperial magistrate under Trajan (reigned 98–117), and his letters to Trajan provide one of the few surviving records of the relationship between the imperial office and provincial governors.Pliny rose through a series of civil and military offices, the cursus honorum. He was a friend of the historian Tacitus and might have employed the biographer Suetonius on his staff. Pliny also came into contact with other well-known men of the period, including the philosophers Artemidorus and Euphrates the Stoic, during his time in Syria.
Read more or edit on Wikipedia