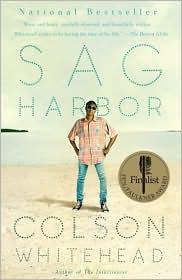 Sag Harbor is a 2009 novel by author Colson Whitehead. Sag Harbor takes place in Sag Harbor, a small village in the exclusive Hamptons on the east end of New York's Long Island. The novel's main character is Benji, an African American teenager spending the summer in a black enclave of his predominately white and close-knit town along with his brother Reggie. Set in 1985, the novel touches on themes of race, class, and commercial culture.
Read more or edit on Wikipedia