John Cannizzaro Jr. (born 1943), better known as John Canemaker, is an American independent animator, animation historian, author, teacher and lecturer. In 1980, he began teaching and developing the animation program at New York University, Tisch School of the Arts', Kanbar Institute of Film and Television Department. Since 1988 he has directed the program and is currently a tenured full professor. From 2001-2002 he was Acting Chair of the NYU Undergraduate Film and Television Department. In 2006, his film The Moon and the Son: An Imagined Conversation, a 28-minute animated piece about Canemaker's relationship with his father, won the Academy Award for best animated short. In 2007 the same piece picked up an Emmy award for its graphic and artistic design.
Read more or edit on Wikipedia

Walt's People: Volume 9: Talking Disney with the Artists who Knew Him

Walt's People: Volume 11: Talking Disney with the Artists who Knew Him

volume 11 from the book series 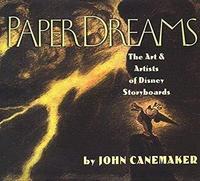