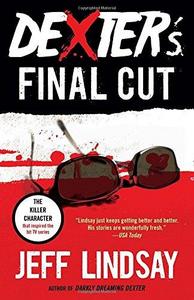 Dexter's Final Cut is the seventh novel written by Jeff Lindsay, and the seventh book in the 'Dexter Morgan' book series about a serial killer who targets other serial killers. The book was released on September 17, 2013. Responding to the lack of alliteration on the title in comparison to the previous ones in the series, Lindsay has stated, "It's because this novel is very different than the previous, shockingly so..."
Read more or edit on Wikipedia