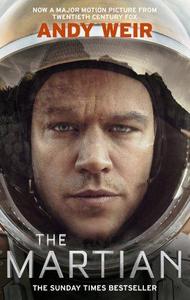 The Martian is a 2011 science fiction novel written by Andy Weir. It was his debut novel under his own name. It was originally self-published in 2011; Crown Publishing purchased the rights and re-released it in 2014. The story follows an American astronaut, Mark Watney, as he becomes stranded alone on Mars in the year 2035 and must improvise in order to survive. The Martian, a film adaptation directed by Ridley Scott and starring Matt Damon, was released in October 2015.
Read more or edit on Wikipedia