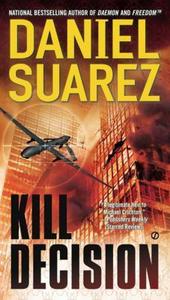 Kill Decision is a science fiction novel by Daniel Suarez, published in 2012. It deals with themes of espionage, artificial intelligence, and warfare using robots and drones. The story deals with the fictional scenario where insurgents have created automated drones that identify enemies and make the decision to kill them (the "kill decision") without human intervention.
Read more or edit on Wikipedia