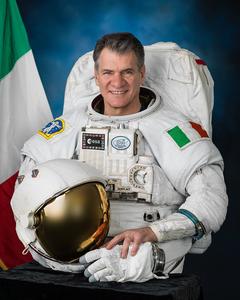 Major Paolo Angelo Nespoli (born 6 April 1957) is an Italian astronaut and engineer of the European Space Agency (ESA). In 2007, he first traveled into space aboard the Space Shuttle Discovery as a mission specialist of STS-120. In December 2010 he again traveled into space aboard the Soyuz TMA-20 spacecraft as an Expedition 26/27 flight engineer. Nespoli's third spaceflight was on board Soyuz MS-05, which launched in July 2017 for Expedition 52/53. He was also the European Space Agency's oldest active astronaut prior to his retirement in 2019.
Read more or edit on Wikipedia