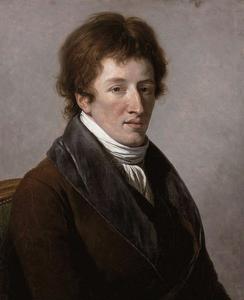 Jean Léopold Nicolas Frédéric, Baron Cuvier (French: [kyvje]; 23 August 1769 – 13 May 1832), known as Georges Cuvier, was a French naturalist and zoologist, sometimes referred to as the "founding father of paleontology". Cuvier was a major figure in natural sciences research in the early 19th century and was instrumental in establishing the fields of comparative anatomy and paleontology through his work in comparing living animals with fossils. Cuvier's work is considered the foundation of vertebrate paleontology, and he expanded Linnaean taxonomy by grouping classes into phyla and incorporating both fossils and living species into the classification. Cuvier is also known for establishing extinction as a fact—at the time, extinction was considered by many of Cuvier's contemporaries to be merely controversial speculation. In his Essay on the Theory of the Earth (1813) Cuvier proposed that now-extinct species had been wiped out by periodic catastrophic flooding events. In this way, Cuvier became the most influential proponent of catastrophism in geology in the early 19th century. His study of the strata of the Paris basin with Alexandre Brongniart established the basic principles of biostratigraphy.Among his other accomplishments, Cuvier established that elephant-like bones found in the USA belonged to an extinct animal he later would name as a mastodon, and that a large skeleton dug up in Paraguay was of Megatherium, a giant, prehistoric ground sloth. He named the pterosaur Pterodactylus, described (but did not discover or name) the aquatic reptile Mosasaurus, and was one of the first people to suggest the earth had been dominated by reptiles, rather than mammals, in prehistoric times. Cuvier is also remembered for strongly opposing theories of evolution, which at the time (before Darwin's theory) were mainly proposed by Jean-Baptiste de Lamarck and Geoffroy Saint-Hilaire. Cuvier believed there was no evidence for evolution, but rather evidence for cyclical creations and destructions of life forms by global extinction events such as deluges. In 1830, Cuvier and Geoffroy engaged in a famous debate, which is said to exemplify the two major deviations in biological thinking at the time – whether animal structure was due to function or (evolutionary) morphology. Cuvier supported function and rejected Lamarck's thinking. Cuvier also conducted racial studies which provided part of the foundation for scientific racism, and published work on the supposed differences between racial groups' physical properties and mental abilities. Cuvier subjected Sarah Baartman to examinations alongside other French naturalists during a period in which she was held captive in a state of neglect. Cuvier examined Baartman shortly before her death, and conducted an autopsy following her death that disparagingly compared her physical features to those of monkeys.Cuvier's most famous work is Le Règne Animal (1817; English: The Animal Kingdom). In 1819, he was created a peer for life in honor of his scientific contributions. Thereafter, he was known as Baron Cuvier. He died in Paris during an epidemic of cholera. Some of Cuvier's most influential followers were Louis Agassiz on the continent and in the United States, and Richard Owen in Britain. His name is one of the 72 names inscribed on the Eiffel Tower.
Read more or edit on Wikipedia