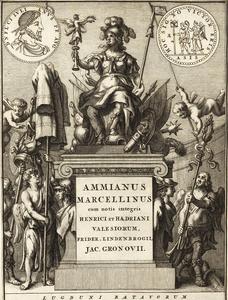 Ammianus Marcellinus (born c. 330, died c. 391 – 400) was a Roman soldier and historian who wrote the penultimate major historical account surviving from antiquity (preceding Procopius). His work, known as the Res Gestae, chronicled in Latin the history of Rome from the accession of the Emperor Nerva in 96 to the death of Valens at the Battle of Adrianople in 378, although only the sections covering the period 353 to 378 survive.
Read more or edit on Wikipedia