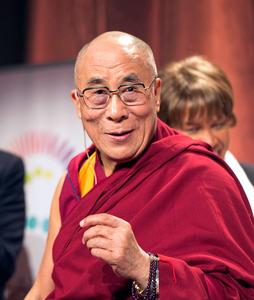 The 14th Dalai Lama (spiritual name Jetsun Jamphel Ngawang Lobsang Yeshe Tenzin Gyatso, known as Tenzin Gyatso; né Lhamo Thondup), known as Gyalwa Rinpoche to the Tibetan people, is the current Dalai Lama, the highest spiritual leader and former head of state of Tibet. Born on 6 July 1935, or in the Tibetan calendar, in the Wood-Pig Year, 5th month, 5th day, he is considered a living Bodhisattva; specifically, an emanation of Guanyin Bodhisattva (Avalokiteśvara). He is also the leader of the Gelug school, the newest school of Tibetan Buddhism, formally headed by the Ganden Tripa. The central government of Tibet, the Ganden Phodrang, invested the Dalai Lama with temporal duties until his exile in 1959. On 29 April 1959, the Dalai Lama established the independent Tibetan government in exile in the north Indian hill station of Mussoorie, which then moved in May 1960 to Dharamshala, where he resides. He retired as political head in 2011 to make way for a democratic government, the Central Tibetan Administration.The 14th Dalai Lama was born to a farming family in Taktser (Hongya Village), in the traditional Tibetan region of Amdo (administratively Qinghai Province, Republic of China). He was selected as the tulku of the 13th Dalai Lama in 1937 and formally recognized as the 14th Dalai Lama in a public declaration near the town of Bumchen in 1939. As with the recognition process for his predecessor, a Golden Urn selection process was not used. His enthronement ceremony was held in Lhasa on 22 February 1940 and he eventually assumed full temporal (political) duties on 17 November 1950, at the age of 15, after the People's Republic of China's occupation of Tibet. The Tibetan government administered the historic Tibetan regions of Ü-Tsang, Kham and Amdo.During the 1959 Tibetan uprising, the Dalai Lama escaped to India, where he currently lives in exile while remaining the most important spiritual leader of Tibet. The Dalai Lama advocates for the welfare of Tibetans while continuing to call for the Middle Way Approach to negotiations with China for the autonomy of the nation and the protection of its culture, including for the religious rights of Tibetans. The Dalai Lama also meets with other world leaders, religious leaders, philosophers and scientists, and travels worldwide giving Tibetan Buddhist teachings. His work includes focus on the environment, economics, women's rights, nonviolence, interfaith dialogue, physics, astronomy, Buddhism and science, cognitive neuroscience, reproductive health and sexuality. Along with his teachings on Tibetan Mahayana and Vajrayana Buddhism, the Dalai Lama's Kalachakra teachings and initiations are international events. He is the chief Patron of the Maha Bodhi Society of India, conferred upon him at the 2008 Annual General Meeting of the Maha Bodhi Society of India.The Dalai Lama was awarded the Nobel Peace Prize in 1989, and the US Congressional Gold Medal in 2006. Time magazine named the Dalai Lama one of the "Children of Mahatma Gandhi" and Gandhi's spiritual heir to nonviolence.
Read more or edit on Wikipedia