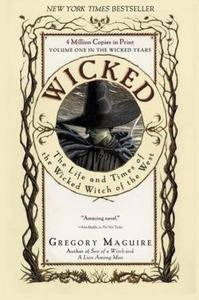 Wicked: The Life and Times of the Wicked Witch of the West

Wicked: The Life and Times of the Wicked Witch of the West is a novel published in 1995, written by Gregory Maguire and illustrated by Douglas Smith. It is a revisionist exploration of the characters and land of Oz from the 1900 novel The Wonderful Wizard of Oz by L. Frank Baum, its sequels, and the 1939 film adaption The Wizard of Oz. However, unlike Baum's writings and the 1939 film, the book is not for children, as it contains adult language and content, including violent imagery and sexual situations. The novel presents events, characters and situations from Baum's books and the film in new ways, making numerous alterations. It is the first in The Wicked Years series, and was followed by Son of a Witch (published in September 2005), A Lion Among Men (published in October 2008), and Out of Oz (published in November 2011). In 2003, the first novel in the series was adapted as the Broadway musical Wicked.
Read more or edit on Wikipedia

part of the series: The Wicked Years
original title: Wicked: The Life and Times of the Wicked Witch of the West
language: English
date of publication: 1995
genre: parallel novel, speculative fiction novel
followed by: Son of a Witch