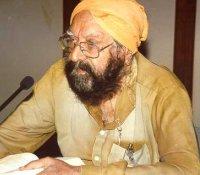 Khushwant Singh (born Khushal Singh, 2 February 1915 – 20 March 2014) was an Indian author, lawyer, diplomat, journalist and politician. His experience in the 1947 Partition of India inspired him to write Train to Pakistan in 1956 (made into film in 1998), which became his most well-known novel.Born in Punjab, Khushwant Singh was educated in Modern School, New Delhi, St. Stephen's College, and graduated from Government College, Lahore. He studied at King's College London and was awarded an LL.B. from University of London. He was called to the bar at the London Inner Temple. After working as a lawyer in Lahore High Court for eight years, he joined the Indian Foreign Service upon the Independence of India from British Empire in 1947. He was appointed journalist in the All India Radio in 1951, and then moved to the Department of Mass Communications of UNESCO at Paris in 1956. These last two careers encouraged him to pursue a literary career. As a writer, he was best known for his trenchant secularism, humour, sarcasm and an abiding love of poetry. His comparisons of social and behavioural characteristics of Westerners and Indians are laced with acid wit. He served as the editor of several literary and news magazines, as well as two newspapers, through the 1970s and 1980s. Between 1980-1986 he served as Member of Parliament in Rajya Sabha, the upper house of the Parliament of India. Khushwant Singh was awarded the Padma Bhushan in 1974; however, he returned the award in 1984 in protest against Operation Blue Star in which the Indian Army raided Amritsar. In 2007 he was awarded the Padma Vibhushan, the second-highest civilian award in India.
Read more or edit on Wikipedia