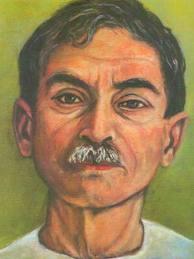 Dhanpat Rai Srivastava (31 July 1880 – 8 October 1936), better known by his pen name Premchand (pronounced [mʊnʃiː preːm t͡ʃənd̪] (listen), was an Indian writer famous for his modern Hindustani literature. Munshi Premchand was a pioneer of Hindi and Urdu social fiction. He was one of the first authors to write about caste hierarchies and the plights of women and labourers prevalent in the society of late 1880s.He is one of the most celebrated writers of the Indian subcontinent, and is regarded as one of the foremost Hindi writers of the early twentieth century. His works include Godaan, Karmabhoomi, Gaban, Mansarovar, "Idgah". He published his first collection of five short stories in 1907 in a book called Soz-e-Watan. He began writing under the pen name "Nawab Rai", but subsequently switched to "Premchand", Munshi being an honorary prefix. A novel writer, story writer and dramatist, he has been referred to as the "Upanyas Samrat" ("Emperor Among Novelists") by writers. His works include more than a dozen novels, around 300 short stories, several essays and translations of a number of foreign literary works into Hindi.
Read more or edit on Wikipedia