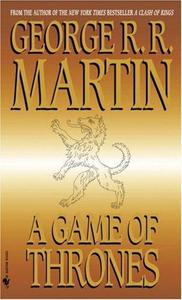 A Game of Thrones

A Game of Thrones is the first novel in A Song of Ice and Fire, a series of fantasy novels by the American author George R. R. Martin. It was first published on August 1, 1996. The novel won the 1997 Locus Award and was nominated for both the 1997 Nebula Award and the 1997 World Fantasy Award. The novella Blood of the Dragon, comprising the Daenerys Targaryen chapters from the novel, won the 1997 Hugo Award for Best Novella. In January 2011, the novel became a New York Times Bestseller and reached No. 1 on the list in July 2011.In the novel, recounting events from various points of view, Martin introduces the plot-lines of the noble houses of Westeros, the Wall, and the Targaryens. The novel has inspired several spin-off works, including several games. It is also the namesake and basis for the first season of Game of Thrones, an HBO television series that premiered in April 2011. A March 2013 paperback TV tie-in re-edition was also titled Game of Thrones, excluding the indefinite article "A".
Read more or edit on Wikipedia