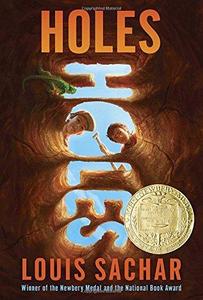 Holes is a 1998 young adult novel written by Louis Sachar and first published by Farrar, Straus and Giroux. The book centers on an unlucky teenage boy named Stanley Yelnats, who is sent to Camp Green Lake, a juvenile detention center in a desert in Texas, after being falsely accused of theft. The plot explores the history of the area and how the actions of several characters in the past have affected Stanley's life in the present. These interconnecting stories touch on themes such as racism, homelessness, illiteracy, and arranged marriage. The book was both a critical and commercial success. Much of the praise for the book has centered around its complex plot, interesting characters, and representation of people of color and incarcerated youth. It won the 1998 U.S. National Book Award for Young People's Literature and the 1999 Newbery Medal for the year's "most distinguished contribution to American literature for children". In 2012 it was ranked number six among all-time children's novels in a survey published by School Library Journal. Holes was adapted by Walt Disney Pictures as a feature film of the same name released in 2003. The film received generally positive reviews from critics, grossing $71 million, and was released in conjunction with the book companion Stanley Yelnats's Survival Guide to Camp Green Lake. A sequel to Holes entitled Small Steps was published in 2006 and centers on one of the secondary characters in the novel, Armpit.
Read more or edit on Wikipedia