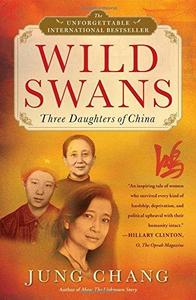 Wild Swans: Three Daughters of China is a family history that spans a century, recounting the lives of three female generations in China, by Chinese writer Jung Chang. First published in 1991, Wild Swans contains the biographies of her grandmother and her mother, then finally her own autobiography. The book won two awards: the 1992 NCR Book Award and the 1993 British Book of the Year. The book has been translated into 37 languages and sold over 13 million copies.
Read more or edit on Wikipedia