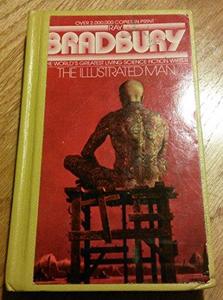 The Illustrated Man is a 1951 collection of eighteen science fiction short stories by American writer Ray Bradbury. A recurring theme throughout the eighteen stories is the conflict of the cold mechanics of technology and the psychology of people. It was nominated for the International Fantasy Award in 1952.The unrelated stories are tied together by the frame story of "The Illustrated Man", a vagrant former member of a carnival freak show with an extensively tattooed body whom the unnamed narrator meets. The man's tattoos, allegedly created by a time-traveling woman, are individually animated, and each tells a different tale. All but one of the stories had been published previously elsewhere, although Bradbury revised some of the texts for the book's publication. The book was made into the 1969 film, The Illustrated Man, starring Rod Steiger and Claire Bloom. It presented adaptations of the stories "The Veldt", "The Long Rain" and "The Last Night of the World". Some of the stories, including "The Veldt", "The Fox and the Forest" (as "To the Future"), "Marionettes, Inc.", and "Zero Hour" were dramatized for the 1955-1957 radio series X Minus One. "The Veldt", "The Concrete Mixer", "The Long Rain", "Zero Hour", and "Marionettes Inc." were adapted for The Ray Bradbury Theater television series.
Read more or edit on Wikipedia