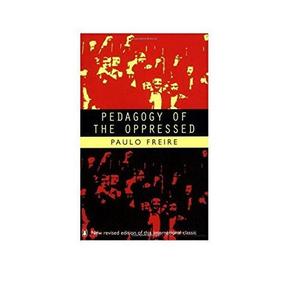 Pedagogy of the Oppressed

Pedagogy of the Oppressed (Portuguese: Pedagogia do Oprimido) is a book written by Brazilian educator Paulo Freire, first written in Portuguese in 1968. It was first published in English in 1970, in a translation by Myra Ramos. The book is considered one of the foundational texts of critical pedagogy, and proposes a pedagogy with a new relationship between teacher, student, and society. Dedicated to the oppressed and based on his own experience helping Brazilian adults to read and write, Freire includes a detailed Marxist class analysis in his exploration of the relationship between the colonizer and the colonized. In the book, Freire calls traditional pedagogy the "banking model of education" because it treats the student as an empty vessel to be filled with knowledge, like a piggy bank. He argues that pedagogy should instead treat the learner as a co-creator of knowledge.As of 2000, the book had sold over 750,000 copies worldwide. It is the third most cited book in the social sciences.
Read more or edit on Wikipedia