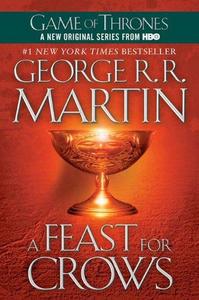 A Feast for Crows

A Feast for Crows is the fourth of seven planned novels in the epic fantasy series A Song of Ice and Fire by American author George R. R. Martin. The novel was first published on October 17, 2005, in the United Kingdom, with a United States edition following on November 8, 2005.In May 2005, Martin announced that the "sheer size" of his still-unfinished manuscript for A Feast for Crows had led him and his publishers to split the narrative into two books. Rather than divide the text in half chronologically, Martin opted to instead split the material by character and location, resulting in "two novels taking place simultaneously" with different casts of characters. A Feast for Crows was published months later, and the concurrent novel A Dance with Dragons was released on July 12, 2011. Martin also noted that the A Song of Ice and Fire series would now likely total seven novels.A Feast for Crows was the first novel in the series to debut at number one on The New York Times Best Seller list, a feat among fantasy writers only previously achieved by Robert Jordan and Neil Gaiman. In 2006 the novel was nominated for the Hugo Award, the Locus Award, and the British Fantasy Society Award. It has since been adapted, along with A Dance With Dragons, for television as the fifth season of Game of Thrones, though elements of the novel appeared in the series' fourth and sixth seasons.
Read more or edit on Wikipedia

part of the series: A Song of Ice and Fire
original title: A Feast for Crows
language: English
date of publication: 2005
genre: speculative fiction novel, speculative fiction
follows: A Storm of Swords
followed by: A Dance with Dragons
www.georgerrmartin.com/grrm_book/a-feast-for-crows-a-song-of-ice-and-fire-book-four