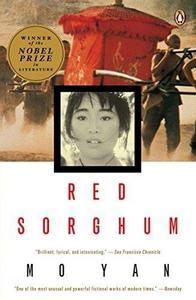 Red Sorghum: A Novel of China or Red Sorghum Clan (simplified Chinese: 红高粱家族; traditional Chinese: 紅高粱家族; pinyin: Hóng Gāoliáng Jiāzú; lit. 'red sorghum family') is a Chinese language novel by Mo Yan. Published in 1986, it was Mo's first novel and remains one of his best-known works.The novel consists of the volumes "Red Sorghum", "Sorghum Wine", "Dog Ways", "Sorghum Funeral", and "Strange Death", which were first serialized in various magazines in 1986. "Dog Ways" was published in the April 1986 issue of Shiyue ("October" magazine); "Sorghum Wine" in the July 1986 issue of PLA Arts, "Sorghum Funeral" in the August 1986 issue of Beijing Wenxue and "Strange Death" in the November–December issue of Kunlun magazine. It was the magazine serializations before the publication of the full novel in 1987 which were seen by director Zhang Yimou, who immediately proposed to Mo Yan to make the novel into a film. The next year the novel was published, and almost simultaneously the 1987 Chinese-language film Red Sorghum was released. In 1988 it was presented during the competition and won the Golden Bear at the Berlin Film Festival. It was initially given an ad hoc English title "The Red Sorghum Clan" in some sources (Wang 1996) but was translated from the Chinese by Howard Goldblatt in 1993 with the subtitle "Red Sorghum - A Novel of China". Red Sorghum's plot revolves around three generations of the Shandong family between 1923 and 1976. The narrator tells the story of his family's struggles, first as distillery owners making sorghum wine and then as resistance fighters during the Second Sino-Japanese War. The novel also details civil disputes between warring Chinese groups, including rival gangs and political powers. The book also refers to the Cultural Revolution and the 1972 resumption of diplomatic relations between China and Japan. Mo Yan employs a terse style in the novel that is characterized by brevity and non-chronological storytelling written in the first-person. The work contains elements of folk-tale that blend into myth and superstition, placing it in the magic-realist genre. As the principal crop of Shandong province's Northeast Gaomi Township (the author's hometown), red sorghum (sorghum bicolor) frames the narrative as a symbol of indifference and vitality. Amidst decades of bloodshed and death, it grows steadfast to provide food, shelter, wine and life.
Read more or edit on Wikipedia