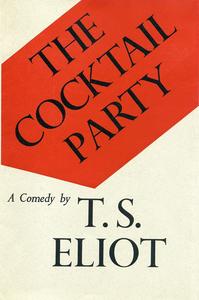 For the novella and play by Okinawan writer Ōshiro Tatsuhiro, see The Cocktail Party.The Cocktail Party is a play by T. S. Eliot. Elements of the play are based on Alcestis, by the Ancient Greek playwright Euripides. The play was the most popular of Eliot's seven plays in his lifetime, although his 1935 play, Murder in the Cathedral, is better remembered today. It was written while Eliot was a visiting scholar at the Institute for Advanced Study in Princeton, New Jersey in 1948.The Cocktail Party was first performed at the Edinburgh Festival in 1949. In 1950 the play had successful runs in London and New York theaters (the Broadway production received the 1950 Tony Award for Best Play.) It focuses on a troubled married couple who, through the intervention of a mysterious stranger, settle their problems and move on with their lives. The play starts out seeming to be a light satire of the traditional British drawing room comedy. As it progresses, however, the work becomes a darker philosophical treatment of human relations. As in many of Eliot's works, the play uses absurdist elements to expose the isolation of the human condition. In another recurring theme of Eliot's plays, the Christian martyrdom of the mistress character is seen as a sacrifice that permits the predominantly secular life of the community to continue. In 1951, in the first Theodore Spencer Memorial Lecture at Harvard University Eliot criticised his own plays in the second half of the lecture, explicitly the plays Murder in the Cathedral, The Family Reunion, and The Cocktail Party. The lecture was published as "Poetry and Drama" and later included in Eliot's 1957 collection On Poetry and Poets.
Read more or edit on Wikipedia