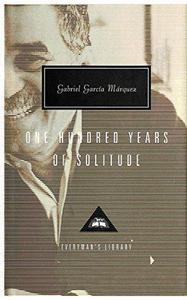 One Hundred Years of Solitude

One Hundred Years of Solitude (Spanish: Cien años de soledad, American Spanish: [sjen ˈaɲos ðe soleˈðað]) is a landmark 1967 novel by Colombian author Gabriel García Márquez that tells the multi-generational story of the Buendía family, whose patriarch, José Arcadio Buendía, founded the (fictitious) town of Macondo. The novel is often cited as one of the supreme achievements in literature.The magical realist style and thematic substance of One Hundred Years of Solitude established it as an important representative novel of the literary Latin American Boom of the 1960s and 1970s, which was stylistically influenced by Modernism (European and North American) and the Cuban Vanguardia (Avant-Garde) literary movement. Since it was first published in May 1967 in Buenos Aires by Editorial Sudamericana, One Hundred Years of Solitude has been translated into 46 languages and sold more than 50 million copies. The novel, considered García Márquez's magnum opus, remains widely acclaimed and is recognized as one of the most significant works both in the Hispanic literary canon and in world literature.
Read more or edit on Wikipedia