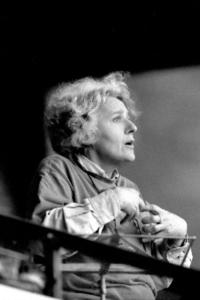 Ariane Mnouchkine (French: [aʁjan nuʃkin]; born 3 March 1939) is a French stage director. She founded the Parisian avant-garde stage ensemble Théâtre du Soleil in 1964. She wrote and directed 1789 (1974) and Molière (1978), and directed La Nuit Miraculeuse (1989). She holds a Chair of Artistic Creation at the Collège de France, an Honorary Degree in Performing Arts from the University of Rome III, awarded in 2005 and an Honorary Doctor of Letters from Oxford University, awarded 18 June 2008.
Read more or edit on Wikipedia