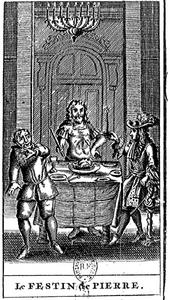 Dom Juan ou le Festin de pierre ("Don Juan or The Feast of the Stone [Statue]") is a five-act 1665 comedy by Molière based upon the Spanish legend of Don Juan Tenorio. The aristocrat Dom Juan is a rakehell who seduces, marries, and abandons Elvira, discarded as just another romantic conquest. Later, he invites to dinner the statue of a man whom he recently had murdered; the statue accepts and reciprocates Dom Juan's invitation. In the course of their second evening, the stone statue of the murdered man charms, deceives, and leads Dom Juan to Hell.Molière's comedy derives from the Spanish play The Trickster of Seville and the Stone Guest (1630), by Tirso de Molina, but each playwright presents a different interpretation of the libertine protagonist. Molière's Dom Juan is a French man who admits to being an atheist and a free-thinker; whereas, de Molina's Don Juan is a Spanish man who admits to being Catholic, and believes that repentance for and forgiveness of sin are possibilities that will admit him to Heaven, but death arrives early, and thwarts his avoiding moral responsibility for a dissolute life; in both the Spanish and the French versions of the comedy, Dom Juan goes to Hell.Throughout the plot of Dom Juan or the Feast of the Statue, the valet Sganarelle is the only character who defends religion, but his superstitious Catholicism is a thematic and intellectual foil to Dom Juan's free-thinking disregard for religion and social and sexual norms. In early 1665, after fifteen performances of the original run of Dom Juan, the French royal authorities halted performances of the play; Molière then had to defend the play and himself against accusations of irreligiousity and political subversion. That the playwright Molière was celebrating a libertine life by positively portraying a rake, thus the intent of the play is disrespectful of the official doctrine of the Church, and thus subversive of the royal authority of the king of France, who is an absolute monarch. The consequent state-and-church censorship legally compelled Molière to delete socially subversive scenes and irreligious dialogue from the script, specifically the scene where Sganarelle and Dom Juan encounter the Pauper in the forest, in Act III.In 1682, the prose edition of Dom Juan ou le Festin de pierre was censored, with paper strips glued upon the offensive text, for inclusion to an eight-volume edition of the plays of Molière. The censored, verse edition Le Festin de pierre (1677) by Thomas Corneille changed the style of writing — and thus changed the intent of the play — by exaggerating Dom Juan's libertinism to render Molière's comedy of manners into a cautionary tale of the unhappy fate of irreligious people.
Read more or edit on Wikipedia