Mary Hays (1759–1843) was an autodidact intellectual who published essays, poetry, novels and several works on famous (and infamous) women. She is remembered for her early feminism, and her close relations to dissenting and radical thinkers of her time including Robert Robinson, Mary Wollstonecraft, William Godwin and William Frend. She was born in 1759, into a family of Protestant dissenters who rejected the practices of the Church of England (the established church). Hays was described by those who disliked her as 'the baldest disciple of [Mary] Wollstonecraft' by The Anti Jacobin Magazine, attacked as an 'unsex'd female' by clergyman Robert Polwhele, and provoked controversy through her long life with her rebellious writings. When Hays's fiancé John Eccles died on the eve of their marriage, Hays expected to die of grief herself. But this apparent tragedy meant that she escaped an ordinary future as wife and mother, remaining unmarried. She seized the chance to make a career for herself in the larger world as a writer.Hays was influenced by Mary Wollstonecraft's A Vindication of the Rights of Woman, and after writing admiringly to her, the two women became friends. The backlash following Wollstonecraft's death and posthumous publication of her Memoirs impacted Hays' later work, which some scholars have called more conservative. Among these later productions is the six-volume compendium Female Biography: or Memoirs of Illustrious and Celebrated Women of All Ages and Countries, in which Wollstonecraft is not mentioned, although Hays had written an extensive obituary for The Annual Necrology shortly after Godwin's controversial Memoirs. If Wollstonecraft was neglected through the nineteenth century, Hays and her writing received even less critical evaluation or academic attention until the twentieth-century's emerging feminist movement.
Read more or edit on Wikipedia 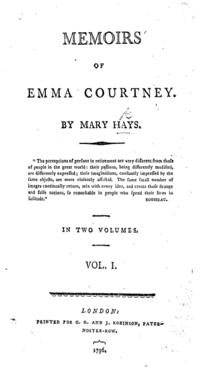 The Victim of Prejudice

Female Biography; Or, memoirs of Illustrious and Celebrated Women