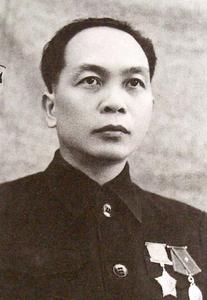 Võ Nguyên Giáp (Vietnamese: [vɔ̌ˀ ŋʷīən zǎːp]; 25 August 1911 – 4 October 2013) was a Vietnamese general and communist politician who is regarded as having been one of the greatest military strategists of the 20th century. He served as interior minister in President Hồ Chí Minh's Việt Minh government, the military commander of the Việt Minh, the commander of the People's Army of Vietnam (PAVN), minister of defence, and deputy prime minister. He also served as a member of the Politburo of the Vietnam Workers' Party, which in 1976 became the Communist Party of Vietnam. Giáp first rose to prominence during World War II, when he served as the military leader of the Viet Minh resistance against the Japanese occupation of Vietnam. He had no direct military training and was a history teacher at a French-speaking academy, influenced by historical military leaders and personally citing T. E. Lawrence and Napoleon as his two greatest influences. He later earnt the moniker "Red Napoleon" from some Western sources.Giáp was a crucial military commander in two wars: the First Indochina War of 1946–1954, fighting against the French, and the Vietnam War of 1955–1975, fighting against South Vietnam and its American backers. He participated in several historically significant battles, including Cao Bằng in 1950, Hòa Bình in 1951–1952, Điện Biên Phủ in 1954, the Tet Offensive in 1968, the Easter Offensive in 1972, and the final Ho Chi Minh Campaign of 1975. Giáp was a mastermind military builder; during the First Indochina War, he had transformed a rag-tag band of rebels to a 'fine light-infantry army' fielding cryptography, artillery and advanced logistics and capable of challenging a larger, modernised French Far East Expeditionary Corps and the Vietnamese National Army. He was also a very effective logistician, laying the foundation of the Ho Chi Minh trail, recognised as one of the great feats of military engineering of the 20th century.As head of the army during the Vietnam War, Giáp is often credited with North Vietnam's military victory over South Vietnam and the United States. Recent scholarship indicates other leaders had played more prominent roles, with former subordinates and now rivals Văn Tiến Dũng and Hoàng Văn Thái assuming a more direct military responsibility than Giáp. Nevertheless, he played a pivotal role in the second transformation of the PAVN into "one of the largest, most formidable" mechanised and combined-arms fighting force capable of delivering a knockout blow to an increasingly more powerful rival Army of the Republic of Vietnam (ARVN) in conventional warfare.
Read more or edit on Wikipedia