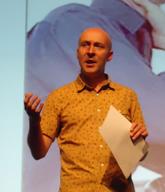 Christopher Brookmyre (born 6 September 1968) is a Scottish novelist whose novels, generally in a crime or police procedural frame, mix comedy, politics, social comment and action with a strong narrative. He has been referred to as a Tartan Noir author. His debut novel was Quite Ugly One Morning; subsequent works have included All Fun and Games until Somebody Loses an Eye (2005), Black Widow (2016) and Bedlam (2013), which was written in parallel with the development of a first-person shooter videogame, also called Bedlam. He also writes historical fiction with his wife, Dr Marisa Haetzman, under the pseudonym Ambrose Parry. Source: Wikipedia (en)