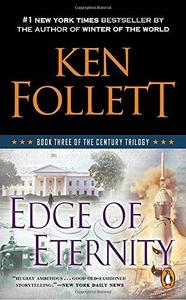 Edge of Eternity is a historical and family saga novel by Welsh-born author Ken Follett, published in 2014. It is the third book in the Century Trilogy, after Fall of Giants and Winter of the World. The novel tells the story of the third generation of families developed in the first two novels and located in the United States, the United Kingdom, Germany and the Soviet Union during the height of the Cold War. The novel's characters become involved in a number of the most significant global events during the period, including the Cuban Missile Crisis, the British Invasion, the Kennedy Administration, the Watergate scandal, and the Civil Rights Movement.
Read more or edit on Wikipedia