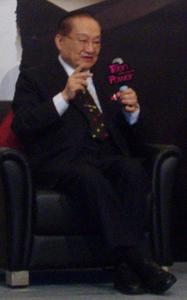 Louis Cha Leung-yung (Chinese: 查良鏞; 10 March 1924 – 30 October 2018), better known by his pen name Jin Yong (Chinese: 金庸), pronounced "Gum Yoong" in Cantonese, was a Chinese wuxia ("martial arts and chivalry") novelist and essayist who co-founded the Hong Kong daily newspaper Ming Pao in 1959 and served as its first editor-in-chief. He was Hong Kong's most famous writer, and is named along with Gu Long and Liang Yusheng as the "Three Legs of the Tripod of Wuxia". His wuxia novels have a widespread following in Chinese communities worldwide. His 15 works written between 1955 and 1972 earned him a reputation as one of the greatest and most popular wuxia writers ever. By the time of his death he was the best-selling Chinese author, and over 100 million copies of his works have been sold worldwide (not including an unknown number of pirated copies). According to The Oxford Guide to Contemporary World Literature, Jin Yong's novels are considered to be of very high quality and are able to appeal to both highbrow and lowbrow tastes. His works have the unusual ability to transcend geographical and ideological barriers separating Chinese communities of the world, achieving a greater success than any other contemporary Hong Kong writer.His works have been translated into many languages including English, French, Catalan, Spanish, Korean, Japanese, Cambodian, Vietnamese, Thai, Burmese, Malay and Indonesian. He has many fans outside of Chinese-speaking areas, as a result of the numerous adaptations of his works into films, television series, comics and video games. The asteroid 10930 Jinyong (1998 CR2) is named after him.
Read more or edit on Wikipedia