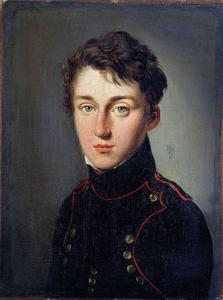 Sous-lieutenant Nicolas Léonard Sadi Carnot (French: [kaʁno]; 1 June 1796 – 24 August 1832) was a French mechanical engineer in the French Army, military scientist and physicist, and often described as the "father of thermodynamics." He published only one book, the Reflections on the Motive Power of Fire (Paris, 1824), in which he expressed the first successful theory of the maximum efficiency of heat engines and laid the foundations of the new discipline: thermodynamics. Carnot's work attracted little attention during his lifetime, but it was later used by Rudolf Clausius and Lord Kelvin to formalize the second law of thermodynamics and define the concept of entropy. His father used the suffix Sadi to name him because of his intense interest in the character of Saadi Shirazi, a well-known Iranian poet. Based on purely technical concerns, such as improving the performance of the steam engine, Sadi Carnot's intellect laid the groundwork for modern science technological designs, such as the automobile or jet engine.
Read more or edit on Wikipedia