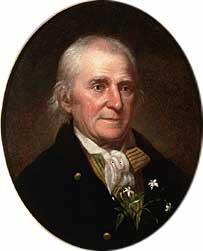 William Bartram (April 20, 1739 – July 22, 1823) was an American botanist, ornithologist, natural historian, and explorer. Bartram was author of an acclaimed book, now known by the shortened title Bartram's Travels, which chronicled his explorations of the southern British colonies in North America from 1773–1777. Bartram has been described as "the first naturalist who penetrated the dense tropical forests of Florida."Bartram was one of the first ornithologists born in America. In 1756, at the age of 17, he collected the type specimens of 14 species of American birds, which were illustrated and described by the English naturalist George Edwards in Gleanings of Natural History vol. 2 (1760). These accounts formed the basis of the scientific descriptions of Linnaeus (1707–1778), Johann Friedrich Gmelin (1748–1804), and John Latham (1740–1837). Bartram also made significant contributions to botanical literature. Like his father, he was a member of the American Philosophical Society, elected in 1768.The standard author abbreviation W.Bartram is used to indicate this person as the author when citing a botanical name.
Read more or edit on Wikipedia