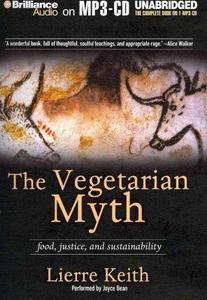 The Vegetarian Myth: Food, Justice, and Sustainability is a 2009 book by Lierre Keith. Keith is an ex-vegan who believes veganism has damaged her health and others'. Keith argues that agriculture is destroying not only human health but entire ecosystems, such as the North American prairie, and destroying topsoil. Keith also considers modern agriculture to be the root cause of slavery, imperialism, militarism, chronic hunger and disease.Keith argues humans should accept death as a necessary precursor to food in that "everyone will get eaten, sooner or later". In sum. Her proposition is that herbivores eat grass, humans eat herbivores, and then (eventually) worms/bacteria/etc. eat humans.
Read more or edit on Wikipedia