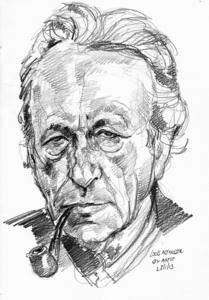 Louis Pierre Althusser (UK: , US: ; French: [altysɛʁ]; 16 October 1918 – 22 October 1990) was a French Marxist philosopher. He was born in Algeria and studied at the École normale supérieure in Paris, where he eventually became Professor of Philosophy. Althusser was a long-time member and sometimes a strong critic of the French Communist Party (Parti communiste français, PCF). His arguments and theses were set against the threats that he saw attacking the theoretical foundations of Marxism. These included both the influence of empiricism on Marxist theory, and humanist and reformist socialist orientations which manifested as divisions in the European communist parties, as well as the problem of the cult of personality and of ideology. Althusser is commonly referred to as a structural Marxist, although his relationship to other schools of French structuralism is not a simple affiliation and he was critical of many aspects of structuralism. Althusser's life was marked by periods of intense mental illness. In 1980, he killed his wife, the sociologist Hélène Rytmann, by strangling her. He was declared unfit to stand trial due to insanity and committed to a psychiatric hospital for three years. He did little further academic work, dying in 1990.
Read more or edit on Wikipedia