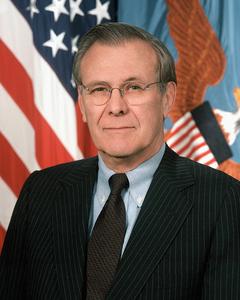 Donald Henry Rumsfeld (born July 9, 1932) is an American former politician. Rumsfeld served as Secretary of Defense from 1975 to 1977 under Gerald Ford, and again from January 2001 to December 2006 under George W. Bush. He is both the youngest and the second-oldest person to have served as Secretary of Defense. Additionally, Rumsfeld was a three-term U.S. Congressman from Illinois (1963–69), director of the Office of Economic Opportunity (1969–70), counsellor to the president (1969–73), the United States Permanent Representative to NATO (1973–74), and White House Chief of Staff (1974–75). Between his terms as Secretary of Defense, he served as the CEO and chairman of several companies. Born in Illinois, Rumsfeld attended Princeton University, graduating in 1954 with a degree in political science. After serving in the Navy for three years, he mounted a campaign for Congress in Illinois's 13th Congressional District, winning in 1962 at the age of 30. While in Congress, he was a leading co-sponsor of the Freedom of Information Act. Rumsfeld reluctantly accepted an appointment by President Richard Nixon to head the Office of Economic Opportunity in 1969; appointed counsellor by Nixon and entitled to Cabinet-level status, he would also head up the Economic Stabilization Program before being appointed ambassador to NATO. Called back to Washington in August 1974, Rumsfeld was appointed chief of staff by President Ford. Rumsfeld recruited a young one-time staffer of his, Dick Cheney, to succeed him when Ford nominated him to be Secretary of Defense in 1975. When Ford lost the 1976 election, Rumsfeld returned to private business and financial life, and was named president and CEO of the pharmaceutical corporation G. D. Searle & Company. He was later named CEO of General Instrument from 1990 to 1993 and chairman of Gilead Sciences from 1997 to 2001. Rumsfeld was appointed Secretary of Defense for a second time in January 2001 by President George W. Bush. As Secretary of Defense, Rumsfeld played a central role in the invasion of Afghanistan and invasion of Iraq. Before and during the Iraq War, he claimed that Iraq had an active weapons of mass destruction program; yet no stockpiles were ever found. A Pentagon Inspector General report found that Rumsfeld's top policy aide "developed, produced, and then disseminated alternative intelligence assessments on the Iraq and al Qaida relationship, which included some conclusions that were inconsistent with the consensus of the Intelligence Community, to senior decision-makers". Rumsfeld's tenure was controversial for its use of torture and the Abu Ghraib torture and prisoner abuse scandal. Rumsfeld gradually lost political support and he resigned in late 2006. In his retirement years, he published an autobiography Known and Unknown: A Memoir as well as Rumsfeld's Rules: Leadership Lessons in Business, Politics, War, and Life.
Read more or edit on Wikipedia

Known and Unknown: A Memoir