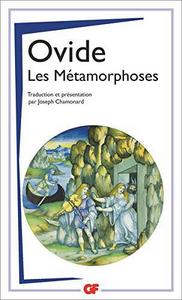 The Metamorphoses (Latin: Metamorphōseōn librī: "Books of Transformations") is a Latin narrative poem by the Roman poet Ovid, considered his magnum opus. Comprising 11,995 lines, 15 books and over 250 myths, the poem chronicles the history of the world from its creation to the deification of Julius Caesar within a loose mythico-historical framework. Although meeting the criteria for an epic, the poem defies simple genre classification by its use of varying themes and tones. Ovid took inspiration from the genre of metamorphosis poetry, and some of the Metamorphoses derives from earlier treatment of the same myths; however, he diverged significantly from all of his models. One of the most influential works in Western culture, the Metamorphoses has inspired such authors as Dante Alighieri, Giovanni Boccaccio, Geoffrey Chaucer, and William Shakespeare. Numerous episodes from the poem have been depicted in acclaimed works of sculpture, painting, and music. Although interest in Ovid faded after the Renaissance, there was a resurgence of attention to his work towards the end of the 20th century. Today the Metamorphoses continues to inspire and be retold through various media. Numerous English translations of the work have been made, the first by William Caxton in 1480.
Read more or edit on Wikipedia