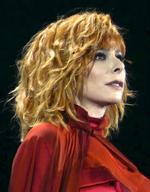 Mylène Jeanne Gautier (French: [milɛn ʒan ɡotje]; born 12 September 1961), known professionally as Mylène Farmer ([milɛn faʁmœʁ]), is a Canadian-born French singer, songwriter, occasional actress, writer, and entrepreneur. Having sold more than 30 million records in France, she is among the most successful recording artists of all time in that country. She holds the record for the most number one hit singles in the French charts, with twenty-one to date – eight of which were consecutive.Born in Pierrefonds, Quebec, Canada (a former city now part of the Montreal borough of Pierrefonds-Roxboro), to French parents, the family soon relocated to Chaville, near Paris, where Farmer pursued a career in modelling and acting. She later gained prominence as a recording artist with the release of her debut single "Maman a tort" in 1984. In 1988, she released her second studio album, Ainsi soit je..., which sold 1.5 million copies in France. The album spawned Farmer's first number one on the French singles chart, "Pourvu qu'elles soient douces". Her third studio album, L'Autre..., sold two million copies, becoming Farmer's best-selling album to date. Its lead single, "Désenchantée", became Farmer's most successful single, and is often described as her signature song.Departing from the synth-pop and Europop soundscape of her first albums, Farmer reinvented her musical style with the release of her fourth studio album, Anamorphosée, in 1995. Recorded in the United States, the album features more live instrumentation and shows rock and R&B-oriented influences. Her fifth studio album, Innamoramento, was released in 1999, featuring more techno influences. In the second part of the 2000s, Farmer continued exploring a range of genres on her albums, namely acoustic pop music on Avant que l'ombre... and electronica on Point de suture.In 2010, Farmer released her eighth studio album, Bleu noir. The album marked Farmer's return to the dark synth-pop and Europop production of her first albums. The lead single, "Oui mais... non", sold over 170.000 copies in France. In 2015, Farmer's tenth studio album, Interstellaires, debuted at number one in France; the album was preceded by the lead single "Stolen Car", a duet with Sting, which reached the number one position on the French singles chart in September 2015. Her eleventh studio album, Désobéissance, was released in 2018, debuting at number one and selling over 265.000 copies.In addition to her music career, Farmer also worked as a songwriter for French singer Alizée, while also being responsible for her image and public appearances. Her debut single, "Moi... Lolita", written by Farmer, reached number one in several countries in Europe, and peaked at number nine on the UK Singles Chart in February 2002. Farmer made her film debut in 1994, starring in Giorgino, and in 2018, she starred in the English-language horror film Ghostland.Throughout her career, Farmer has broken a number of records. She is the best-selling French singer since 1984, has a record number of diamond records, and she is the only artist to have obtained a diamond album in four consecutive decades. Selling over two million copies, her 2001 greatest hits album Les Mots is the highest-selling compilation album by a French recording artist. Source: Wikipedia (en)