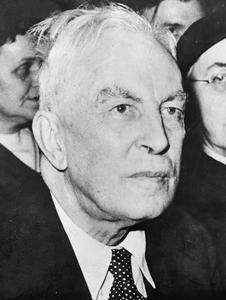 Arnold Joseph Toynbee (; 14 April 1889 – 22 October 1975) was an English historian, a philosopher of history, an author of numerous books and a research professor of international history at the London School of Economics and King's College London. From 1918 to 1950, Toynbee was considered a leading specialist on international affairs; from 1924 to 1954 he was the Director of Studies at Chatham House, in which position he also produced 34 volumes of the Survey of International Affairs, a "bible" for international specialists in Britain.He is best known for his 12-volume A Study of History (1934–1961). With his prodigious output of papers, articles, speeches and presentations, and numerous books translated into many languages, Toynbee was a widely read and discussed scholar in the 1940s and 1950s. By the 1960s his magnum opus had fallen out of favour among mainstream historians, due to recognition that Toynbee favoured myths, allegories and religion over factual data.
Read more or edit on Wikipedia