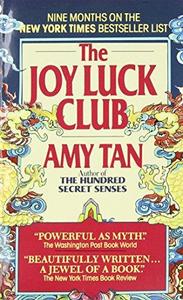 The Joy Luck Club is a 1989 novel written by Amy Tan. It focuses on four Chinese American immigrant families in San Francisco who start a club known as The Joy Luck Club, playing the Chinese game of mahjong for money while feasting on a variety of foods. The book is structured similarly to a mahjong game, with four parts divided into four sections to create sixteen chapters. The three mothers and four daughters (one mother, Suyuan Woo, dies before the novel opens) share stories about their lives in the form of short vignettes. Each part is preceded by a parable relating to the themes within that section. In 1993, the novel was adapted into a feature film directed by Wayne Wang and starring Ming-Na Wen, Lauren Tom, Tamlyn Tomita, France Nguyen, Rosalind Chao, Kieu Chinh, Tsai Chin, Lisa Lu, and Vivian Wu. The screenplay was written by the author Amy Tan along with Ronald Bass. The novel was also adapted into a play, by Susan Kim, which premiered at Pan Asian Repertory Theatre in New York.
Read more or edit on Wikipedia