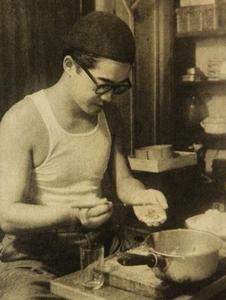 Kōbō Abe (安部 公房, Abe Kōbō), pen name of Kimifusa Abe (安部 公房, Abe Kimifusa, March 7, 1924 – January 22, 1993), was a Japanese writer, playwright, musician, photographer, and inventor. He is best known for his 1962 novel The Woman in the Dunes that was made into an award-winning film by Hiroshi Teshigahara in 1964. Abe has been often compared to Franz Kafka and Alberto Moravia for his modernist sensibilities and his surreal, often nightmarish explorations of individuals in contemporary society.
Read more or edit on Wikipedia