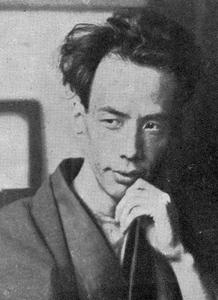 Ryūnosuke Akutagawa (芥川 龍之介, Akutagawa Ryūnosuke, 1 March 1892 – 24 July 1927), art name Chōkōdō Shujin (澄江堂主人), was a Japanese writer active in the Taishō period in Japan. He is regarded as the "father of the Japanese short story", and Japan's premier literary award, the Akutagawa Prize, is named after him. He committed suicide at the age of 35 through an overdose of barbital.
Read more or edit on Wikipedia